Last time, Dilay told you guys about some of the concept art of our game, if you didn’t read our previous blog yet, be sure to read it here. This week’s blog is written by me; Rogier. I’m responsible for a majority of the Lumini creatures in our game.

What are the Lumini?

The majority of you might already know this, but the Lumini creatures are what the player controls while playing the game. Lumini are made up entirely out of energy, but they’re also able to bring energy from one place to another. That’s why Lumini can make more Lumini by bringing energy to a crystal. Aside from making more of their own species by spreading energy to the crystals, they also power up these crystals which then makes the environment around it healthier and thus helps restoring balance to the world. 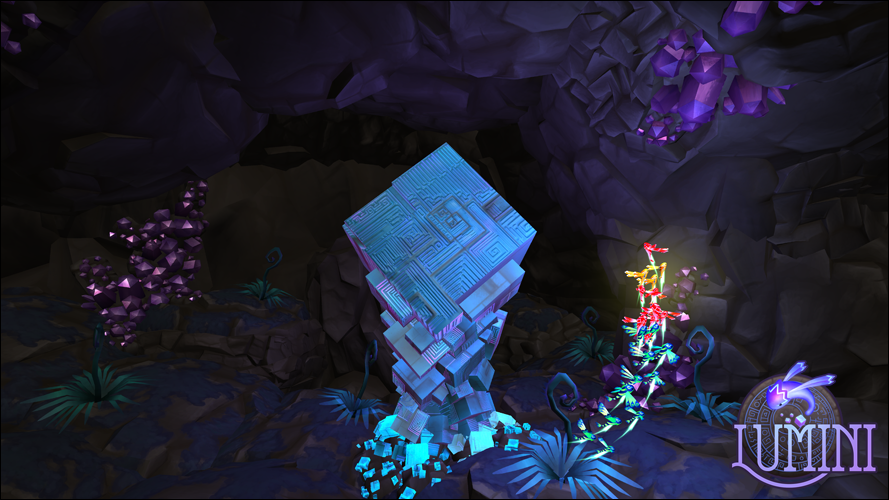 The Lumini and you

As I’ve mentioned before, the Lumini are made of energy. This makes them very flexible to their environment and that is why they are able to respond to the player’s playstyle, how cool is that? Our game programmers made it so that the game keeps track of the player’s playstyle and makes it so that the Lumini are adapting to the way you play. Besides our purple traditional Lumini, we have a few other ‘base’ forms. By playing you can branch into three different playstyles. The first is the Red Lumini, the red Lumini are formed after an aggressive playstyle. If you start stunning your enemies you will be able to get the Red Lumini. These are able to actually kill your enemies so you have a safer passage to the next area.

The final one is the Yellow Lumini. The Yellow Lumini are the species that stand out the most, we also call them the “gather Lumini”. These Lumini are obtained by collecting special orbs that allow your next Lumini energy batch to turn into the yellow Lumini. The trick is; these orbs are hidden in the environments that you’re traveling through. These Lumini have the ability to gather more collectibles that are seen in the game, a quick example would be the energy that converts into the Lumini themselves which would be otherwise unreachable.

A picture displaying all the base Lumini shapes, from left to right: Base, Red, Blue & Yellow

As some of our followers know already; our game artist Olof who also wrote one of the previous blog posts was responsible for making the original Lumini and the three base forms. So far we haven’t shown more, but we’re actually allowing the players to sort of ‘level up’ your Lumini while you’re playing. You will be able to find out how this is done and what it means for your Lumini once you get the game!

However, I’m allowed to give you guys a sneak peek of what the Red Lumini might actually look like, stay tuned for more blogposts! A sketch of the 3rd phase of the Red Lumini